The Hyundai IONIQ 5: the electric future is now. (Image: Hyundai)

Hyundai Motor Group (HMG) has a lot on its proverbial plate as it works to become a “Smart Mobility Provider” rather than just, well, a car maker.

It announced that it is investing >$10-billion in those efforts by 2025, of which $5.54-billion will be used to build an electric vehicle assembly plant and a battery manufacturing facility in Bryan County, Georgia.

And, of course, it has the Hyundai, Kia and Genesis brands.

On the vehicle front, Trevor Lai, a product planner at Hyundai Motor America (HMA), says HMG plans to have the capacity to produce one-million electrified vehicles per year by 2025.

That plant in Georgia, which is to go into production the first half of 2025, will have a 300,000-vehicle capacity.

Hyundai is taking something of a portfolio approach to electrification.

Lai says sales of the electrified offerings in the U.S., in the context of overall sales, so far in 2022 were:

Although this means that 86.3% of HMA sales in Q1 were powered by gasoline engines alone, directionally the electrified sales are moving in the right direction: e.g., EV sales in 2021 were 1.4%.

Let’s face it: for many people, an EV is a technology too far.

So given the currently high (and it seems as though it will be perennially high) gas prices, people might consider a hybrid alternative.

But a plug-in hybrid (PHEV) or a parallel hybrid (HEV)?

Looking at the Tucson offerings, the PHEV brings greater system (i.e., engine and motor) horsepower, 261 hp vs. 226 hp for the HEV.

The PHEV has an all-electric range of 33 miles and the HEV doesn’t offer that.

The EPA estimated combined miles per gallon for the PHEV are 35 mpg. Depending on the trim level of the HEV, the combined number is either 37 or 38 mpg.

The HEV offers 107.9 cubic feet of passenger volume and 38.8 cubic feet of cargo volume (per SAE measurement protocol) with the rear seat up.

For those with a family, odds are interior space is probably more important than 35 more horsepower.

BMW is seeing an increased number of EV sales on a global basis. (Image: BMW)

A study produced by BloombergNEF for the Zero Emission Vehicle Transition Council, an international organization with government representatives from countries that combined account for more than 50% of the global car market, shows that in 2021 global passenger EV sales grew 103%, to almost 6.6-million vehicles.

Of that number, about 70% were pure battery electric, 30% plug-in hybrids and <1% fuel cell vehicles.

BloombergNEF calculated that battery electrics and fuel cell vehicles in 2021 reduced the use of about 1.5-million barrels of oil per day, or about 3.3% of total global demand for oil.

67% of the oil demand avoided is accounted for by the use of two- and three-wheel EVs.

Turns out EV bikes and trikes are really popular in Asia: 67%!

Because of the global pandemic and the negative impact on the auto industry, pickup truck sales, like vehicle sales in general, were down in the U.S. market in 2021.

There was another factor related to the pandemic that wasn’t a shortage of microprocessors:

A question is how well this year will be for pickup trucks.

It isn’t inconceivable that should gas prices stay high (to say nothing of inflation and loan interest rate increases), there could be a notable decrease this year in pickup sales.

Looking back in time when there were bad economic fundamentals in the U.S., there was this, from the website goodcarbadcar.net, which tracks vehicle sales:

“U.S. pickup truck sales plunged 30% to fewer than 1.5 million in 2009 as every truck save for the new Suzuki Equator produced sales declines, some of which were disastrous.”

One of the things that happens when gas prices get high and costs go up is that discretionary spending on things like full-size pickup trucks goes down. Mandatory spending for trucks decreases, too.

In other words, the contractor buys trucks, but probably fewer of them.

The person who wants a pickup because she gets a load or two of mulch at the local garden center each year probably opts out of the truck market entirely.

Which brings me to the Toyota Tundra Platinum CrewMax.

Toyota has a two-truck strategy: the full-size Tundra and the mid-size Tacoma. In 2021 the Tacoma was the best-selling truck in that segment for the 17th consecutive year. There were 252,520 sold, an increase over 2020 of 5.7%.

Toyota really must like the Tundra because it offers a wide array of variants, not just a limited grouping.

Then there is the grade walk, which starts at SR, and goes up to SR5, Limited, Platinum, 1794, and TRD Pro.

The interior offers heated and ventilated leather-trimmed seats (10-way adjustable for the driver). And once comfortably ensconced in said seat your attention immediately goes to a 14-inch touchscreen on the instrument panel that offers an array of infotainment capabilities, from audio to navigation and offers Toyota’s new software. The graphics are clean and straightforward.

The Platinum truck handles a maximum payload of 1,630 pounds (which is one heck of a lot of mulch or whatever else) and as it comes with a Class IV towing hitch receiver and wiring harness, integrated brake controller, trailer backup guide system and trailer-sway control, know that it has a maximum towing capacity of 11,180 pounds.

One of the optional packages on the vehicle I drove that I really liked includes power running boards (let’s face it: you want to get into the truck without pulling a muscle) and the power BedStep® (registered trademark of AMP Research). That step comes out from below the left side of the rear bumper when the tailgate is released; it makes getting into the bed (sheet molded compound with aluminum cross members) easier. (The step automatically retracts when the tailgate is closed.)

The question comes down to this: In 2022, are people going to go with things like the Platinum Tundra (to say nothing of the higher-grade 1794, and although the TRD Pro is higher priced than the 1794, it is for a distinct buyer).

To quote the Magic 8 Ball, “Outlook not so good.”

The Volkswagen Amarok is a pickup that isn’t available in the U.S. market. It is available in Europe, South America, South Africa, and Oceana.

A new model, designed and engineered in Germany and Australia and to be built in South Africa (quite the international undertaking), will launch later this year.

One of the features of the Amarok (for those truck enthusiasts among you, know that it has a payload capacity of up to 2,646 pounds and a towing capacity of 7,716 pounds; there are five available engines, four of which are diesel and one gas) is that it is available with optional “IQ.Light” headlights.

These are LED lights.

While most people sorta, kinda, think they know what LED headlamps are all about, this from Volkswagen Commercial Vehicles is worth quoting in full, not only because of the information it provides, but also the charming way it is written:

LED – What is that actually?

A ‘light-emitting diode’ (LED for short) is a semi-conductor component that emits light when electric current flows through it in the forward direction. The core element of an LED is the semi-conductor crystal, which sits inside a reflective cavity. On the semi-conductor crystal there are two layers of semi-conductor materials with an imbalance of electrons. At low voltage they roam, and the energy released creates photons (flashes of light). The LED chip emits these flashes outward, and the reflective cavity strengthens the outgoing light. Advantages of LEDs: long life, more energy-saving than other bulbs, greater light output, small size, flexibly configurable.

And now you really know.

Buzz, Bulli and a Fox

The VW Bulli, transformed with four axles, developed in Austria in the early ‘60s. (Image: VW)

There is seemingly great anticipation for the all-electric ID. Buzz—the 21st-century version of the microbus that was adored by Deadheads even before there were Deadheads—which will come to the U.S. in 2024.

While in the U.S. the vehicle will be a consumer vehicle, in Europe it will also be offered as a commercial vehicle.

Which explains why it is coming from the Volkswagen Commercial Vehicles brand (just like that Amarok), which is “responsible for the development, construction and sales of light commercial vehicles” and “the lead brand for Autonomous Driving, Mobility as a Service (MaaS) and Transport as a Service (TaaS), an in future will therefore be developing and producing corresponding Special Purpose Vehicles (SPV), such as robo-taxis and robo-vans.”

The testing of the autonomous ID. Buzz AD vehicles in the Munich area is being done by Argo AI and Volkswagen Nutzfahrzeuge (a.k.a., “Volkswagen Commercial Vehicles”).

Let’s face it: something in the U.S. with a “Commercial Vehicles” moniker doesn’t get quite the high-tech respect that it may very well deserve.

The design of the ID. Buzz was influenced by the T1 Microbus that was introduced in 1950. The vehicle became known in in Germany as the “Bulli,” which the new vehicle is sometimes referred to, as well, so if you ever see that name in contemporaneous use, know that there isn’t another vehicle being referred to.

“The ‘Bulli’ is a car that has always stood out thanks to its everyday practicality. For this reason we are testing the ID. Buzz in all conditions and all weather.”

Speaking of “all conditions”

Here’s a bit of a throwback:

A T1 built at the VW plant in Hannover in May 1962 was shipped to Austria, where a Viennese VW mechanic, Kurt Kretzner, decided that he wanted a vehicle that could deal with mountain terrain.

So he added two axles to the two already there.

The vehicle features a steered double axle in the front with two sets of tires at the ends of each and a chain-drive mechanism for the two drive axles, also with additional tires, at the rear.

Rather than being named after a bovine animal, the vehicle was named the “Half-track Fox.”

Kretzner was to build just three of the vehicles.

The one shown above was acquired by VWCV Classic Vehicles in 2018 and completely restored.

That’s the movement among shoppers surveyed for the J.D. Power 2022 U.S. Electric Vehicle Consideration Study who say they are “very likely” to consider an EV for purchase or lease compared to the 2021 study.

“The addition of new EV models has moved the needle on consumer consideration.”

(We asked about the movement from consideration to consumption: given that this is just the second year J.D. Power doesn’t have sufficient data for that determination.)

Stropp: “Tesla remains a dominant player, but new-vehicle shoppers are proving quite willing to consider EVs from legacy brands.”

Turns out that the more someone knows—as in having experience of—EVs, the more likely their consideration:

(That last point means, of course, that 52% of current owners have likelihoods somewhat less than “very.”)

Buick Getting Charged Up

“The Buick brand is committed to an all-electric future by the end of this decade.”

Not “electrified,” as is used by some companies to make it sound like they’re going all-electric.

“We are on the cusp of true change, and the is concept is a tangible vision of it. It inaugurates the next chapter in Buick’s design heritage, as we make the crucial transition to our all-electric future.”

There is one thing that really seems odd about this 2+2 coupe:

Every one of them a crossover.

People like crossovers, so there has been a rush to the exits when it comes to offering car models.

Let’s face it: it is easier to make a concept car look sexy than a concept crossover.

But does Buick know something about consumer demand in the not-too-distant future?

Mon Jun 6 , 2022
A Des Moines teen is about to get a graduation present which is just one of a variety. Katesha Butler is organizing a particular automobile display Sunday for her son Jonathan, 18, who has specific needs and lately graduated from Ruby Van Meter School. Butler is just not confident exactly where he […] 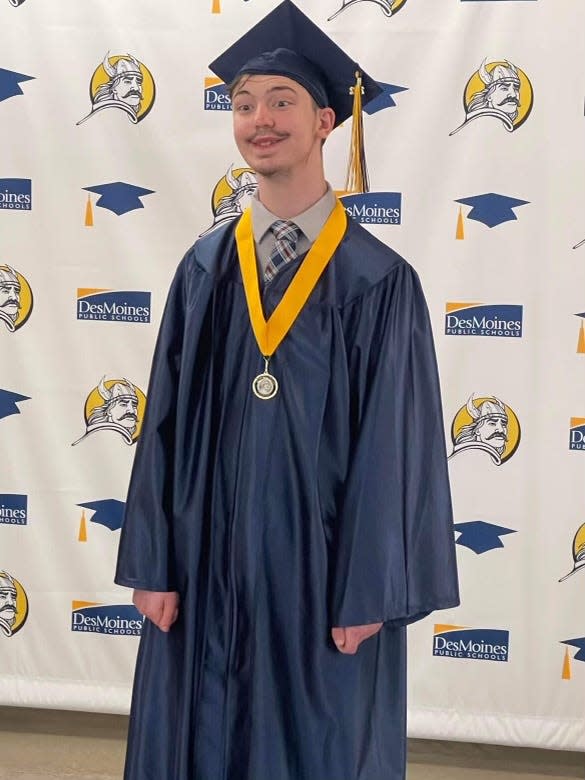