TT Bikes – The Bad and the Ugly: Since last Saturday’s Tour de France stunning stage 20 time trial, the race against the clock has been on everyones lips. So, we’ve been gathering the thoughts of Nikolai Razouvaev again, this time the Russian ‘in the know’ looks at the time trial bike. The pros and the cons – but mostly the cons.

We’ve been talking to our Russian Amigo, Nikolai Razouvaev again and in this piece, he gives us his views on time trial bikes. It’s controversial – but you were expecting that. . .

The 1980 Moscow Olympic Games left a footprint in my memory. That was when aero helmets and skin-suits hit cycling scene’s prime time. 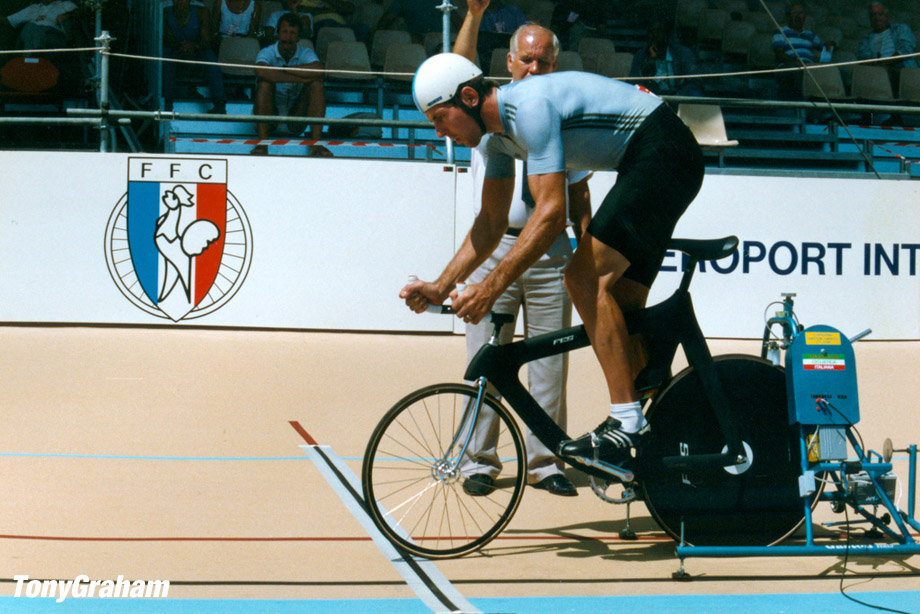 Those East Germans in grey

I couldn’t figure out what was wrong with them until the commentator said something about aerodynamics and then I saw it – the red Colnago bikes had a small front wheel. It didn’t make any sense to me but I assumed the guys who rode them knew their business. After that I watched Sergei Sukhoruchenkov blow the road race apart with a long range solo attack. A play like this one, you remember it for the rest of your life.

This is when a new word entered Russian cycling slang to describe a bike with bullhorn bars – ‘rogatiy.’ It’s the same word you’d use to describe a husband if his wife is sleeping around and everybody knows this except the husband. By 1984 when I made the Soviet national team, Reginald Vorontsov, the Soviet version of Dario Pegoretti, made a dozen ‘rogatiy’ road bikes for the national team and this is what we won the junior world’s TTT on that year. Then in 1985, Ernesto Colnago sent us his masterpiece – a TT machine with 2 Campagnolo disc wheels, the standard time trial equipment everyone wanted by then. 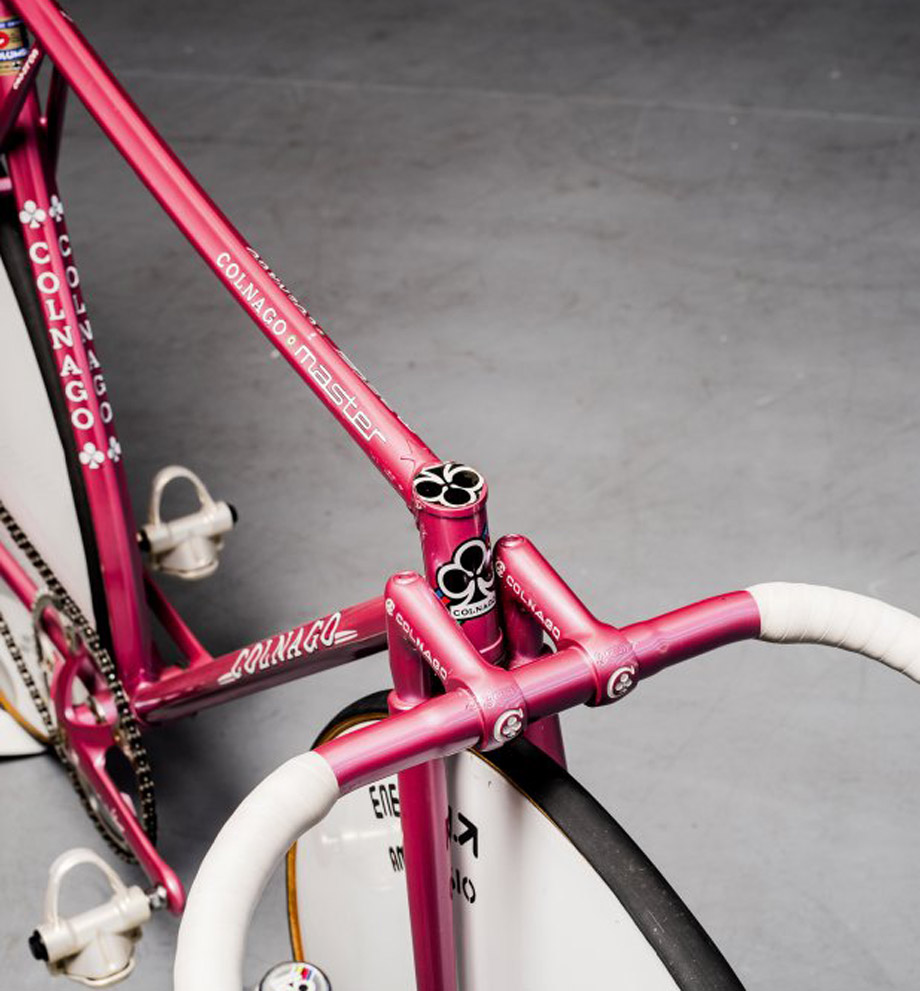 In 1989 Greg LeMond gave us the clip-on triathlon bar and bike manufacturers married it to the existing TT bikes and that’s what we have today. That’s a quick history overview.

Now my argument against TT bikes
We all know why time trial bikes have evolved the way they did – to make you go faster although I don’t know how much faster the bullhorn bikes made us in a time trial. My guess is, not a lot. But once we’ve added the triathlon bar, it changed the time trial racing like nothing else did before, not even disc wheels. This innovation took the TT bike to its own league compared to the road bike; conferring a massive advantage.

Advantage – that’s the word I want to zoom in on.

The BikeRadar website claims the advantage a TT bike gives you is 60-70 watts at 40 km/h, that is, it takes 270-280 watts to ride a road bike at that speed and 220 watts to ride a TT bike. Translated into seconds, a TT bike gives you 9 seconds per kilometre advantage. This is six minutes in a 40 km time trial. Insane. Although I don’t believe the TT bike’s advantage is that staggering, it’s obvious you’d be stupid to race a time trial on a road bike if everyone else is on a TT bike. That much is clear.

Pogačar in the stunning Tour TT

What’s not clear is this – if everyone saves 60-70 watts, or whatever the watt number is, why bother with a TT bike at all? It seems to me the point of technological innovation is to have an edge, a marginal gain (as Sir David might say) over your rival. If everyone has the same edge, it’s not an edge anymore.

Picture car racing: if everyone races a production car, does it really matter if cars are powered by 300 hp engines or 320 hp engines? They’ll drive faster, yes, and maybe the show will be more interesting because of that extra power but cycling time trials are nothing like car racing. A rider leaves the gate and races alone against the clock except now he rides faster on a TT bike. Every single racer does.

Unlike the drama of the 1989 Champs-Élysées time trial where Fignon might’ve had a chance against LeMond had he rode with a tri-bar and wore an aero helmet, today racing on a TT bike doesn’t affect the end result because everyone takes advantage of a TT bike. And that’s it, there’s nothing more to it – everyone gets a faster time on the results sheet. That’s what TT bikes brought to the sport – faster times. Something else they brought: headaches, broken bones and ruined careers. 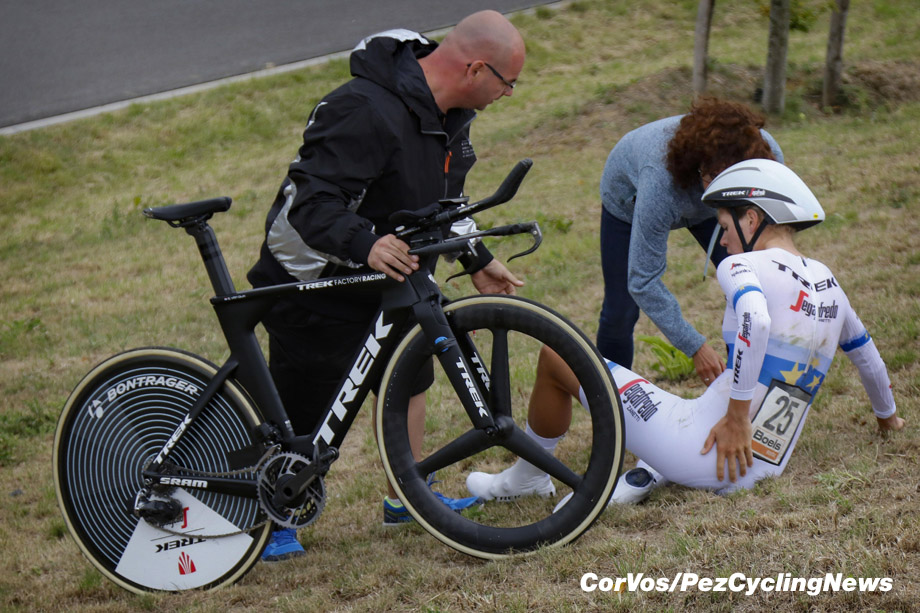 Let’s start with broken bones
TT Bikes Are Dangerous
It’s like someone sat with a pen and paper and asked himself: How do I make a road bike dangerous to ride?

This is the list.
Step one: Reduce control of the road bike to a minimum. Start with bike position. Move your body forward to load the front wheel and make it harder to manoeuvre. 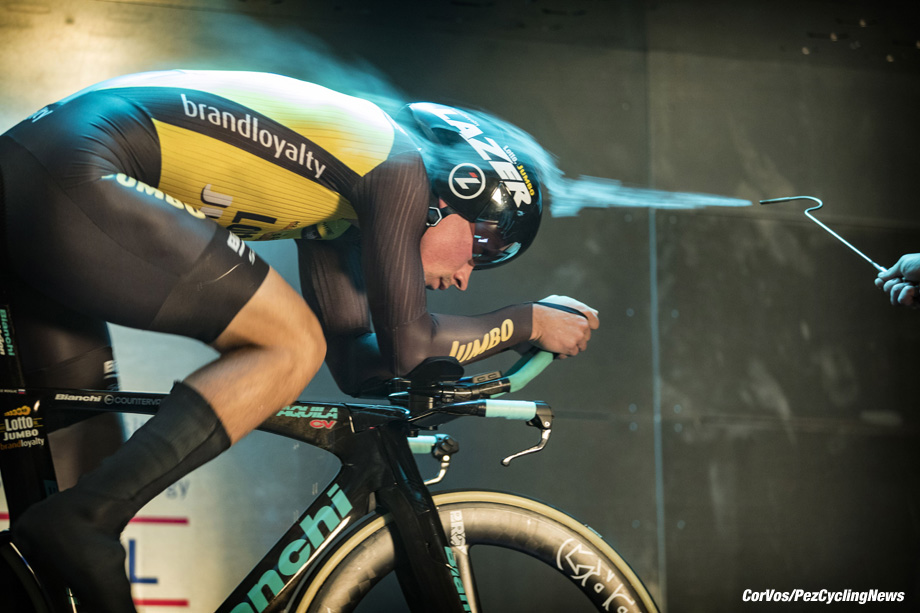 Step two: Now that you’ve loaded the front with your body weight, finish the job and place your elbows next to each other on the handlebar. This way, you have even less control over the bike now and can only go straight or at best lean into a wide curve. When you need to turn, you’ll have to get your hands off the tri-bar and grab the bullhorns.

Step three: Brakes ruin aerodynamics so when you design a TT frame, forget about brakes and focus on speed and aerodynamics. When you finish the frame design, tack on something somewhere that looks like brakes to pass the UCI definition of a road bike. Don’t worry if brakes don’t work, you don’t need brakes in a time trial. 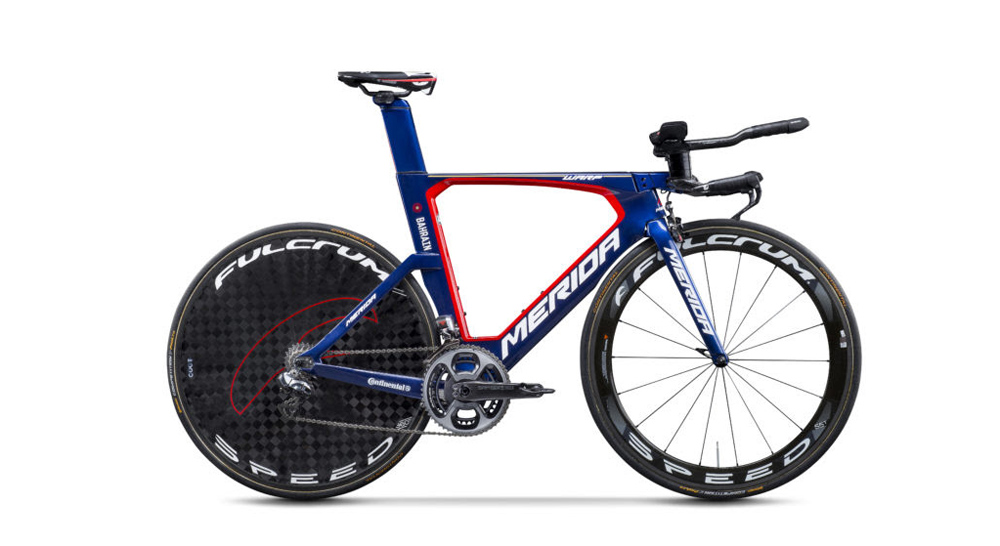 Step four: Finish the package with aero wheels. Put on the front whatever you can get away with to keep the rider on the road against the wind gusts. Every time trial, pray that when a rider takes the elbows off the tri-bar to lean into a corner flying at 55 km/h, a sudden wind gust doesn’t blow him off the road. Sounds farcical because it is. It’s farcical and tragic at the same time. Tragic because TT bikes ruin careers and break riders’ bones. Ask Chris Froome.

This is how David Brailsford described the crash where Froome broke a femur, other bones and damaged internal organs:
“He came down a technical descent and on to a straighter piece of road with houses either side he signalled to Wout that he was going to clear his nose, he took his hand off the bar to do that and a gust of wind took his front wheel, he lost control and went straight into the wall of a house.” 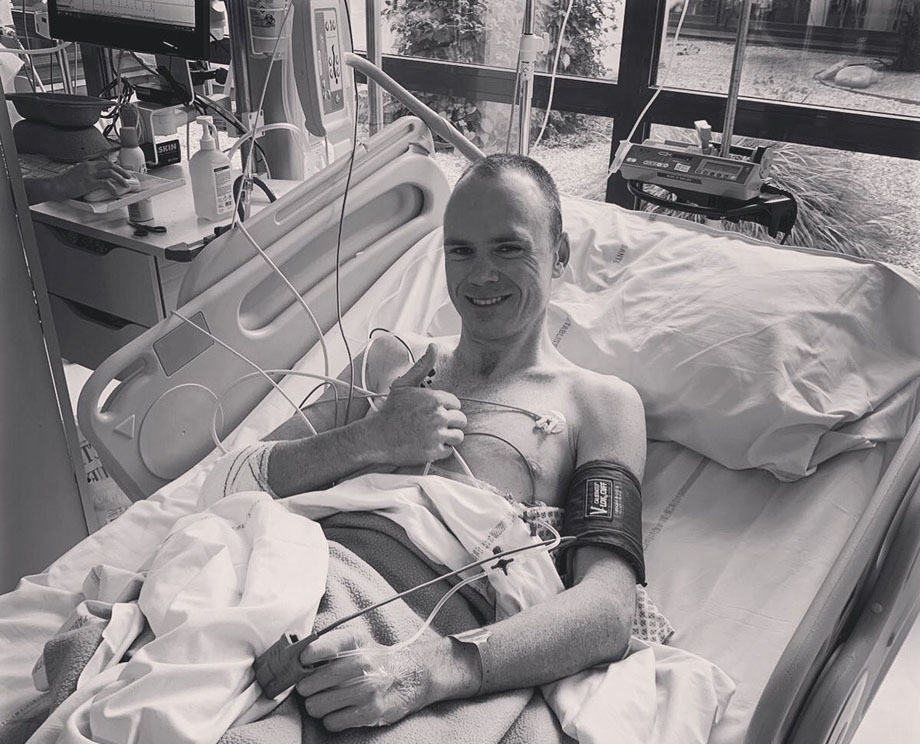 Or look at Alejandro Valverde’s Tour prologue crash. Wet road, yes but this is an old pro. Wet or dry, he knows what to do yet it looks like he doesn’t control his bike at all.

Michael Rasmussen was on his way to win 2007 Tour de France (except he didn’t) when he crashed twice and came close to another one or two as he kept going. Remember how sloppy he handled the bike before each crash? This is a former UCI world mountain bike champion and these guys have superb bike handling skills. Not a clumsy rider.

And there’s the star of the show, the Montpellier TTT stage in 2009 Tour de France. A bit of a circus.

TT Bikes Require Extra Training
Because TT bikes radically change your position on the bike, you have to spend hours and hours of training to adapt to this queer position. Before a Grand Tour, mucking around on a TT bike is a major pain in the neck as you’re trying to tweak your form and at the same time ride your TT bike to keep the bio-mechanics tuned in. 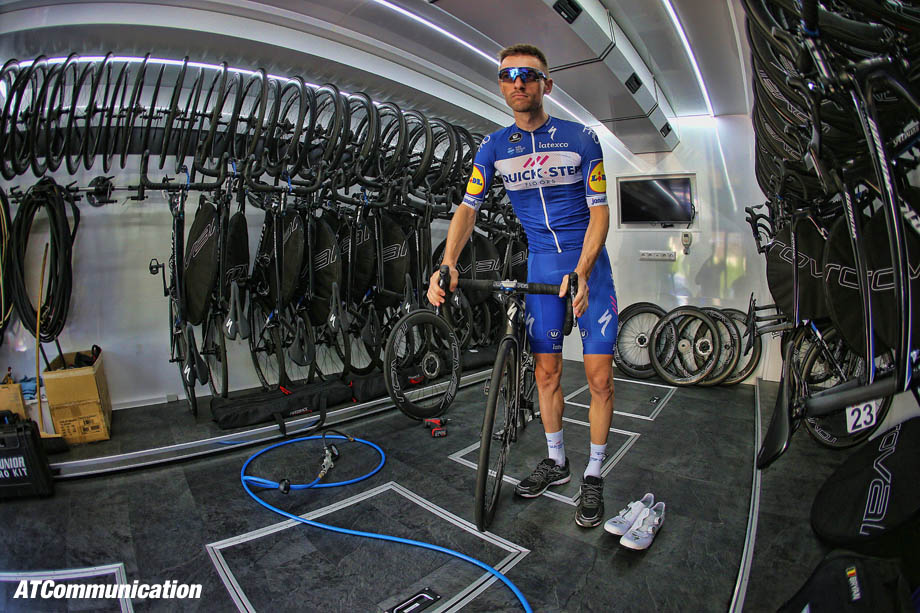 TT Bikes Add Extra Expense
A TT bike is an extra bike a team can do without if they didn’t have to ride them a few times in a season. They take extra storage room on the road and at the team base. More bikes – more money for organisers to spend on transfers between stages inflating the cost of the race. More bikes – more cars, trucks and buses to move them around and more fuel to burn. More cars and buses, you need more drivers – more expenses.

World Tour teams hire between 24 and 30 riders. This is another 40 or so extra bikes mechanics have to look after (some riders have 2 TT bikes, plus spares). You probably need to hire an extra mechanic to handle this extra work. To take advantage of a TT bike, you need to spend time in a wind tunnel adding more expenses. Some teams do not have money for wind tunnels and this lack of funds penalises them against teams with bigger sponsors and bigger budgets. 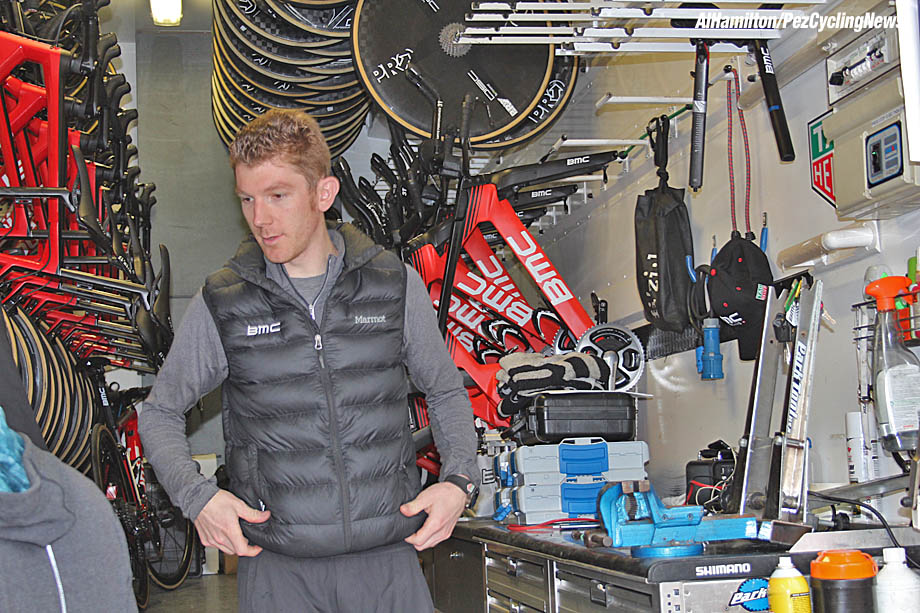 Conclusion
Because everyone races on a TT bike in a time trial, no one gets an edge on the rivals from the TT bikes themselves. By design, TT bikes are dangerous to ride. No one, even a skilled, experienced rider, is safe from a crash, nasty injury or an end to a racing career because a TT bike is a dog to handle at high speed on the road. To take a full advantage TT bikes offer, you need to spend extra time to train on them. TT bikes add expenses to the teams and the organisers they can live without if UCI bans TT bikes from the sport.

Final Thought:
The UCI will never ban TT bikes because bike manufactures sell probably 40% more bikes with this scheme. The riders will keep crashing. The Grand Tours will continue to lose major favourites because bikes manufactures want to sell more bikes. It’s how it goes.

# You can catch up with more of Nikolai Razouvaev’s thoughts at: www.nikolai.com.au. #

Biking Psychology: What It Will take to Make a Winner

Tue Sep 29 , 2020
Like PEZ? Why not subscribe to our weekly e-newsletter to acquire updates and reminders on what’s neat in highway cycling? Numerous critical cyclists desire of their little ones getting fame and fortune on a bike, next in the footsteps of other wonderful youthful riders including Mathieu van der Poel and […]