Volkswagen’s Arteon liftback sedan is back after a long absence from the Australian market – do we still want it?

You can’t always have what you want. In an ideal world, I’d be behind the wheel of the sexy new Volkswagen Arteon Shooting Brake wagon in hot 206TSI specification. But all we’ve got to show you today is the entry-level Arteon 140TSI liftback version.

Luckily, then, it’s a very nice car itself.

After a brief hiatus, Volkswagen’s swoopy four-door coupe is back on Australian roads in a simplified two-variant-strong range, along with an all-new Shooting Brake wagon body style.

Both use 2.0-litre turbocharged four-cylinder engines, though in 140TSI tune the outputs total 140kW/320Nm. This power is routed through the front wheels via a seven-speed dual-clutch gearbox.

As a car in a rapidly dwindling segment, those like the mid/large-size passenger Arteon have fewer competitors – almost – by the day. The Kia Stinger comes to mind as a sporty-styled passenger rival, but I wouldn’t quite call a Toyota Camry an alternative cross-shopped against the Arteon.

So buyers of the Arteon are very intentional and choose the car for its ingrained style and sporty essence. Read on to find out what they can expect.

Whereas brand-new-generation Volkswagen interiors have become perhaps a little too austere and minimalist, the facelifted Arteon’s cabin straddles the right balance between new tech and old functionality. There are still physical buttons in most areas you need them, and designers haven’t annoyingly ditched the standalone climate controls – yet.

It arguably presents more ‘Audi’ than Volkswagen, with aluminium inlays and nice leather materials giving off a premium vibe you’d expect from a prestige segment. The incorporated specifications back that up, with additions such as a 9.2-inch infotainment screen taking pride of place on the dash, satellite navigation, a large 10.25-inch digital instrument cluster, nappa leather upholstery, and 12-way-adjustable seats with heating, ventilation, and Volkswagen’s ErgoComfort massage function.

On the other side of the coin, you can see where Volkswagen has omitted equipment. Literally. There’s an imprint you can unfortunately see on the steering wheel of where you would select steering wheel heating on other models in its range. This is due to VW’s insistence on using touch-sensitive buttons and smells of cost-saving measures.

Get a great deal today

Interested in this car? Provide your details and we’ll connect you to a member of the Drive team.

It’s a good deal the rest of the interior presents so nicely. There are sturdy and premium materials in use across the dash and centre console, and the seats feel nice and comfortable to sit in. Shoulders and waists are supported well, but you may as well discount the massage function within because it’s pretty tame.

Despite being a relatively low-slung car against the SUV norm of today, there’s a good driving position that affords a clean view out over the road. Driver and passenger don’t feel cramped in the front row, and there are a good few storage nooks and crannies to leave items. Nice, wide door pockets allow for oversized bottles and key slots hold smaller items within the centre console.

Back seat passengers are also well-treated with heated seats and separate climate controls. There is a stack of legroom for rear passengers and very comfy seating. The liftback body style does mean that headroom is constrained, but it’s not so bad that you’ll have to stoop your head on journeys. This affliction primarily affects the taller folk sitting in the second row.

Boot space is a commodious 563L when in five-seat mode, but can expand to a full 1557L space when all seats are flattened. The Arteon gets a nifty hands-free boot release, which activates after you’ve kick-motioned underneath the rear bumper.

This is the best form of Volkswagen infotainment whereby it incorporates bits of old and new VW systems. I personally think the brand has gone too far with the current-gen Golf, in that you have to control things like the air-conditioning through the screen.

This car’s 9.2-inch display contains just the right amount of new features and blends it with older functionality and screens. The menus and layouts all make intuitive sense, and items like the integrated satellite navigation present well. For those keen on utilising Apple CarPlay or Android Auto, those systems are available too and both are able to connect wirelessly.

Harman Kardon sound permeates the cabin through a 700-watt, 12-speaker system and it sounds brilliant. While there’s a great amount of bass and clarity of sound from the standard equaliser set-up, there are myriad ways you can personalise your sound to your own tastes.

The pop-up head-up display does feel a bit low-rent for this kind of VW product, where a more polished projection onto the windscreen glass itself would be expected. It’s barely needed anyway when you’ve got a configurable digital instrument cluster that shows speed and all other pertinent vehicle information.

The Arteon’s five-star ANCAP safety rating awarded in August 2017 carries over for this facelifted model.

A suite of active safety features comes standard including Volkswagen’s new Travel Assist feature, which combines adaptive cruise control and lane-centring assist to accelerate, brake and steer the Arteon within its lane at speeds up to 210km/h, enabling semi-autonomous (albeit supervised) driving.

All Volkswagens across Australia are covered under a five-year/unlimited-kilometre warranty. Service intervals occur either at 12 months or 15,000km (whichever comes first), with three years’ maintenance costing $1658 or five years’ maintenance at $3236.

That’s pricey – especially with the fourth service setting you back a whopping $1116 alone.

Against VW’s fuel claim of 6.2L/100km for combined use, a week on test recorded an 8.0L/100km consumption for us – albeit our time was geared more towards town use.

Under the bonnet of the Arteon 140TSI is a 2.0-litre turbocharged four-cylinder petrol engine. A total of 140kW/320Nm is sent through the front wheels, which do a good job of putting that output to the ground.

Pulling power is good, though it’s not the same kind of oomph you’d expect from a sporty-styled liftback sedan. It could do with a bit more pep, which is why you’d pick the 206TSI R-Line.

Where it does excel is in terms of operating as an executive express. It rides beautifully. It drives so smoothly. It’s quiet.

For all the complaints it’s had levelled at it, Volkswagen has developed the DSG automatic transmission into a smooth-shifting cog-swapper. It deftly suits the car’s character as luxurious transport, and is the key takeaway experience from spending time in the Arteon.

Ride control is very supple as the car irons over speed humps and absorbs them with impressive consistency. It can sometimes pick up little bits and pieces and translate them through to the cabin, but the overarching quality is that VW’s Arteon contains a beautifully soft suspension set-up.

The steering is lovely and light, which makes snaking its nose through town very easy. I’m not a huge fan of the oddly shaped steering wheel, but it feels decent and thick to the touch. It can change direction without complaint, and stays largely flat through bends without getting upset on mid-corner bumps or road joins. While not the ultimate in engagement, the Arteon’s drive character can prove fun once you set it upon a nice stretch of tarmac.

Though it’s perhaps not as sporty as I expected from its swoopy and suave styling, the Volkswagen Arteon 140TSI Elegance is a lovely quasi-luxury sedan.

I’m a particular fan of the way the cabin makes front-seat passengers feel, with a presentation that acts a segment above compared to where it’s priced.

Its smooth and soft driving experience is lovely for the everyday commute, but it can equally handle longer drives and road trips with commodious levels of space and comfort. Those after a stylish business express, look this way.

Tom started out in the automotive industry by exploiting his photographic skills but quickly learned that journalists got the better end of the deal. He began with CarAdvice in 2014, left in 2017 to join Bauer Media titles including Wheels and WhichCar and subsequently returned to CarAdvice in early 2021 during its transition to Drive.

He understands that every car buyer is unique and has varying requirements when it comes to buying a new car, but equally, there’s also a loyal subset of Drive audience that loves entertaining enthusiast content.

Tom holds a deep respect for all things automotive no matter the model, priding himself on noticing the subtle things that make each car tick. Not a day goes by that he doesn’t learn something new in an everchanging industry, which is then imparted to the Drive reader base.

Tue Mar 29 , 2022
Patrick Stewart Trae Patton/Paramount+ With the placing, stakes, and essential players now launched, this week’s Star Trek: Picard is tasked with preserving momentum and including some new wrinkles to the season’s ongoing thriller. Although certainly a “middle chapter,” “Watcher” is nevertheless a solid episode that gives just about every member […] 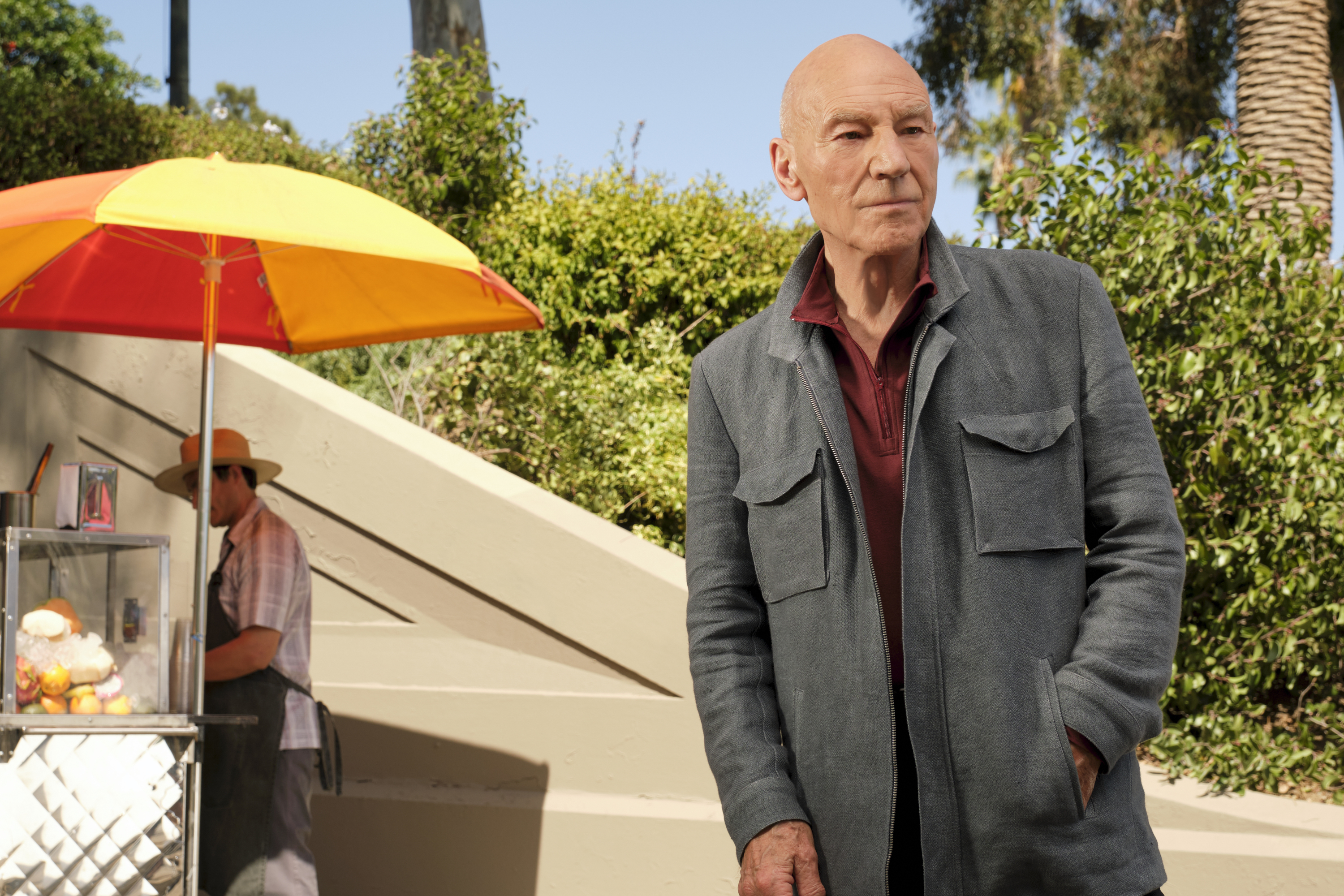