The Alfa Romeo Tonale has started to roll out in European markets as the first electrified model in the history of the Italian brand and its first effort to step into the premium C-SUV segment. Earlier this week we were invited to the official presentation of the Tonale in Greece, where we got our first detailed look at the model.

Let’s start by saying that the Alfa Romeo Tonale looks absolutely stunning in person, with the proportions and the reflections on the sculpted bodywork looking even sexier than in the press shots. 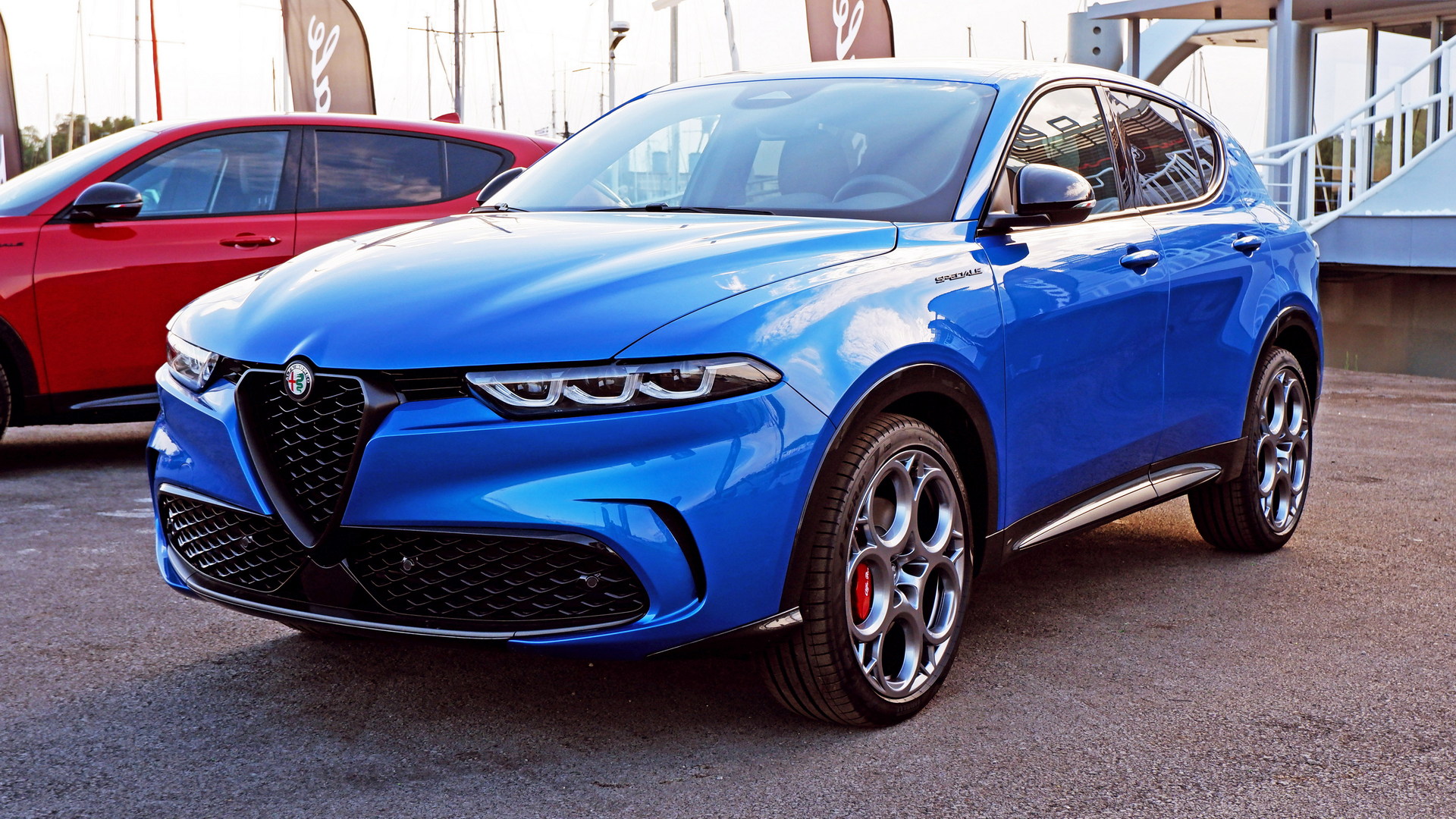 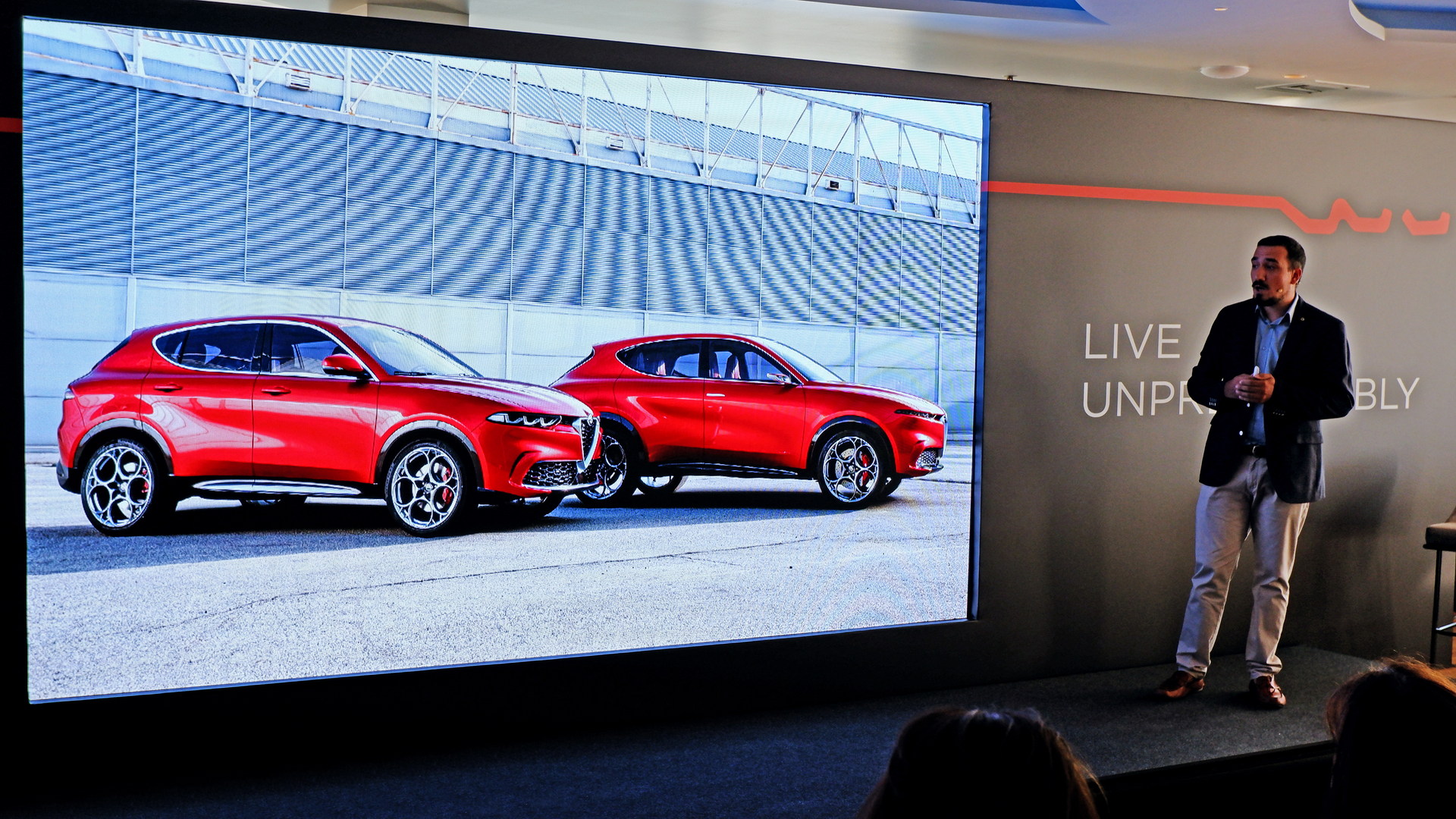 The team at Centro Stile, headed by Alexandros Liokis who was responsible for the exterior design, stayed true to the 2019 concept, despite having to deal with strict regulations, practicality requirements and cost-cutting measures in the production vehicle. Compared to the concept, the full-LED headlights and taillights are thicker, the front overhang is longer, the rear doors reach higher for easier ingress/egress, while the frameless windows, the mirror-replacing cameras and the flush door handles got lost in the process.

Still, after those necessary changes which are minor compared to those we usually come across on most journeys from concept to production, the Tonale hasn’t lost any of its charm, looking like a sculpture on wheels. Despite having plenty of references in Alfa Romeo models from the past including the Giulia GT, the Disco Volante, and the SZ, the SUV has its own character while embedding the DNA of the Italian brand in its core, at least from a stylistic perspective. 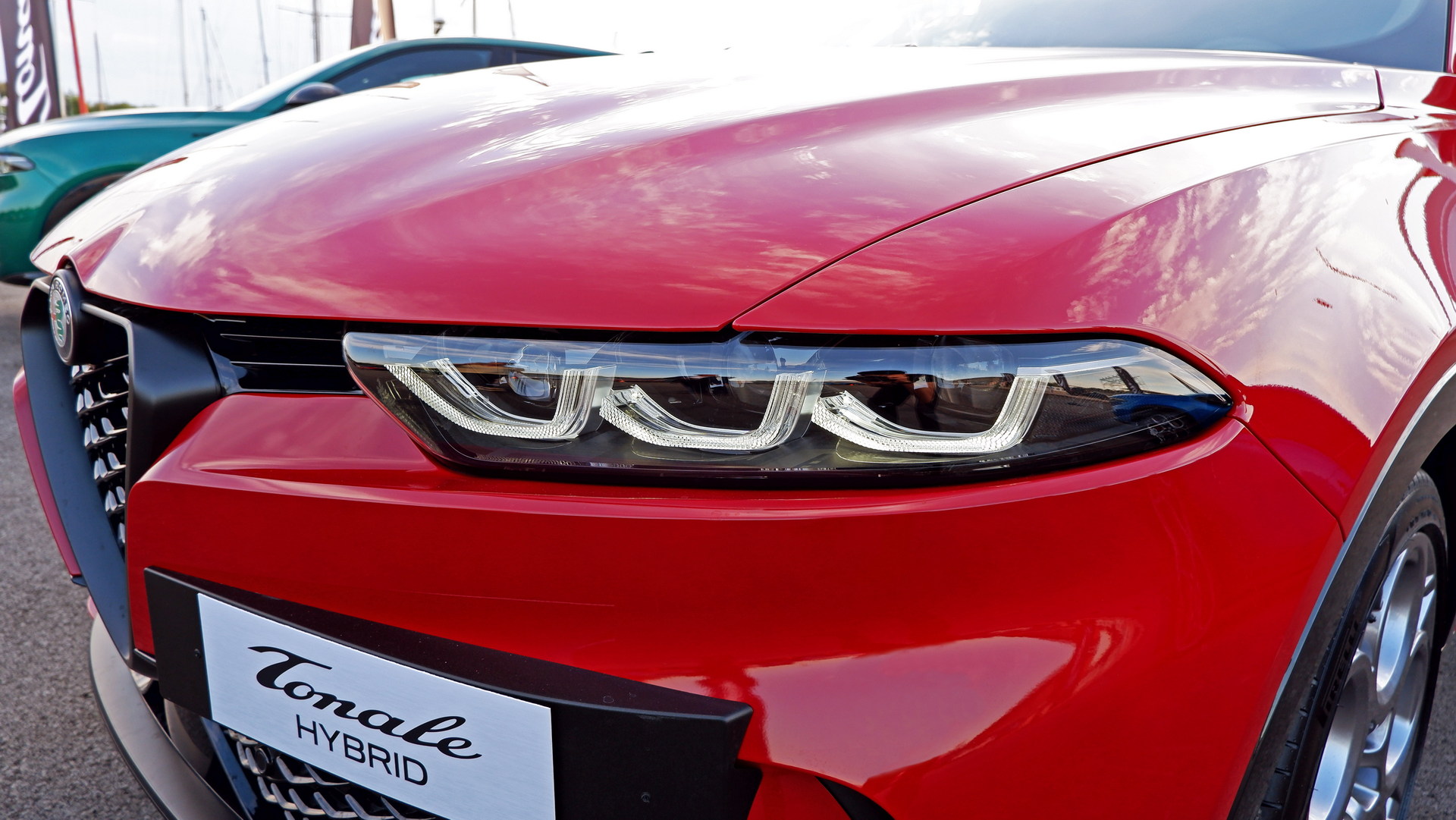 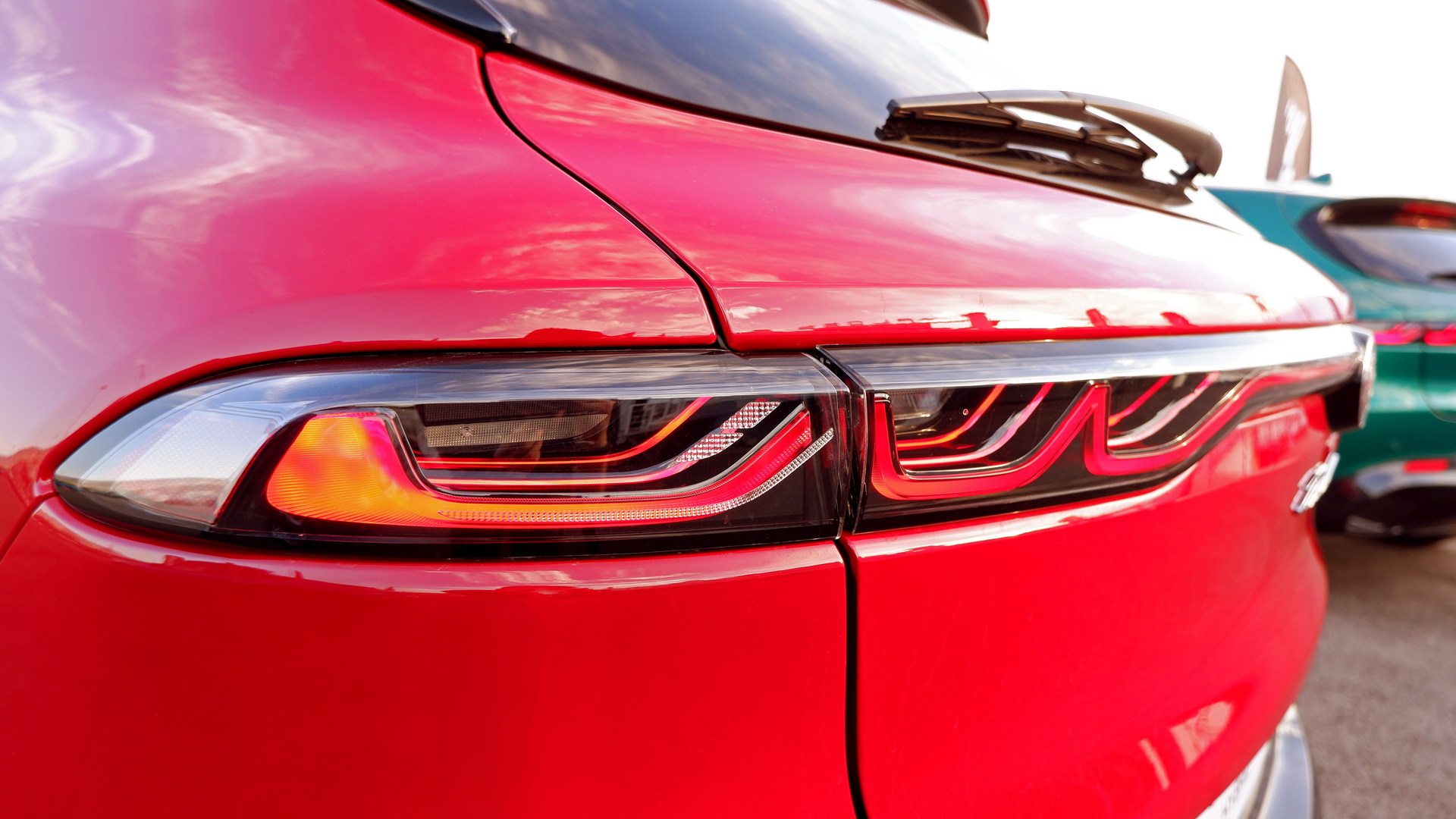 The trim structure of the Tonale includes five levels: Super, Sprint, TI, Veloce, and Speciale. All of them come with pretty generous standard equipment, but in order to get the stunner pictured in our photos, you have to step up to the flagship Speciale. This is the only trim coming with the 20-inch wheels closely imitating the ones from the concept car.

Large diameter wheels are the best form of flattery for the design of the SUV, with the 18-inchers of the base-spec Super looking rather small, and the 19-inchers of the TI and the Veloce bridging the gap. The Super and Sprint also get a different pair of LED headlights with simpler graphics, while if you are a fan of the black accents on the scudetto grille you have to limit yourself to the Veloce and the Speciale. 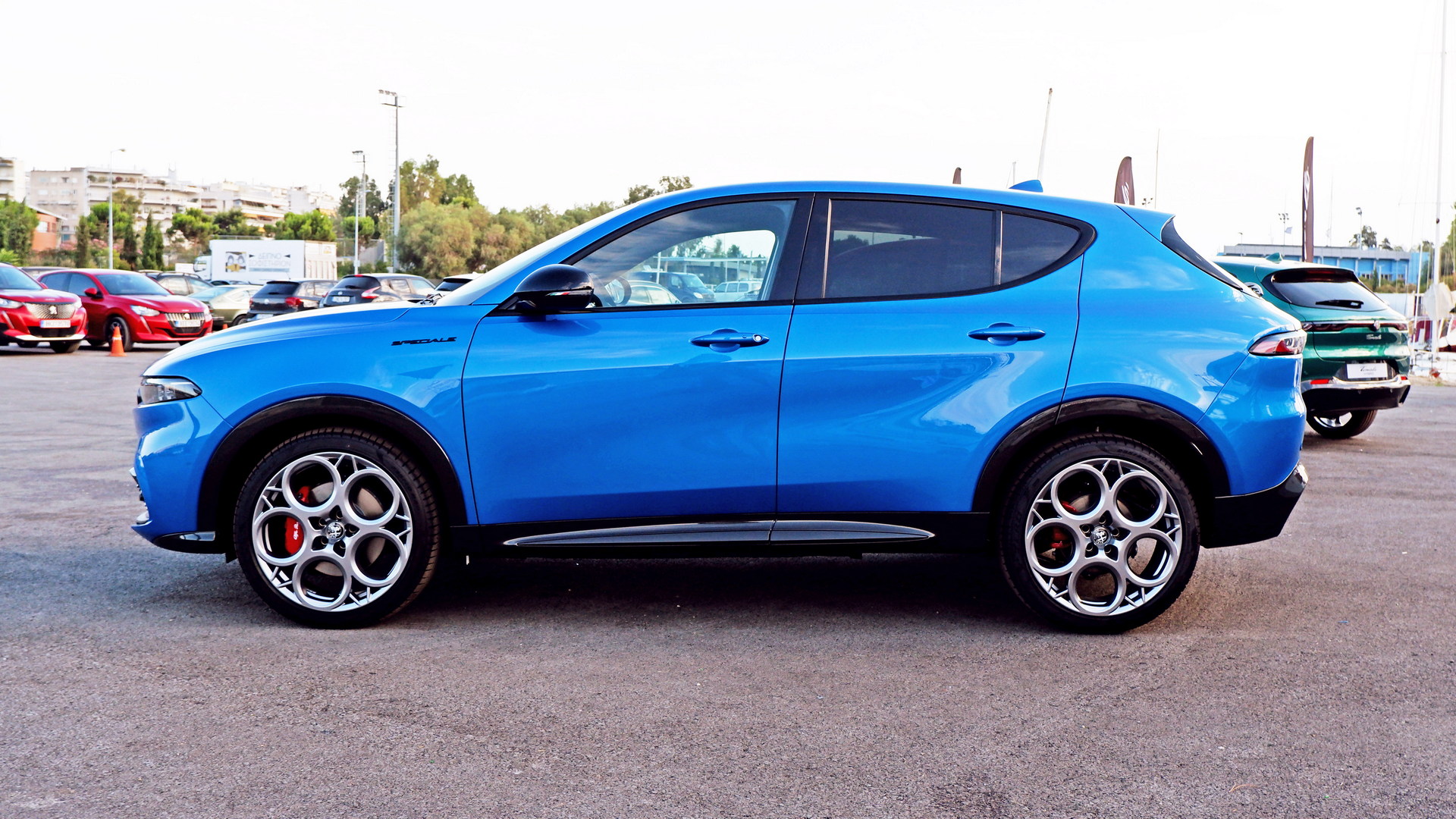 Most of the body panels of the Tonale will be carried over to the Dodge Hornet sibling, with the exception of the Alfa Romeo emblems and the iconic scudetto grille which will be replaced by a certainly less inspiring Dodge-styled front end. This badge-engineering move could cause a problem in the US division of Alfa Romeo, stealing sales and confusing buyers who are already not well aware of the Italian brand’s existence.

Alfa Romeo made some bold statements about the interior quality of the Tonale. Indeed, the design and materials are a big step up from the era of the discontinued Giulietta, and more in line with the larger Giulia and Stelvio. While we wouldn’t describe it as a class-leading product in terms of premium feel and interior design, the effort to match more established rivals is impressive, to say the least. 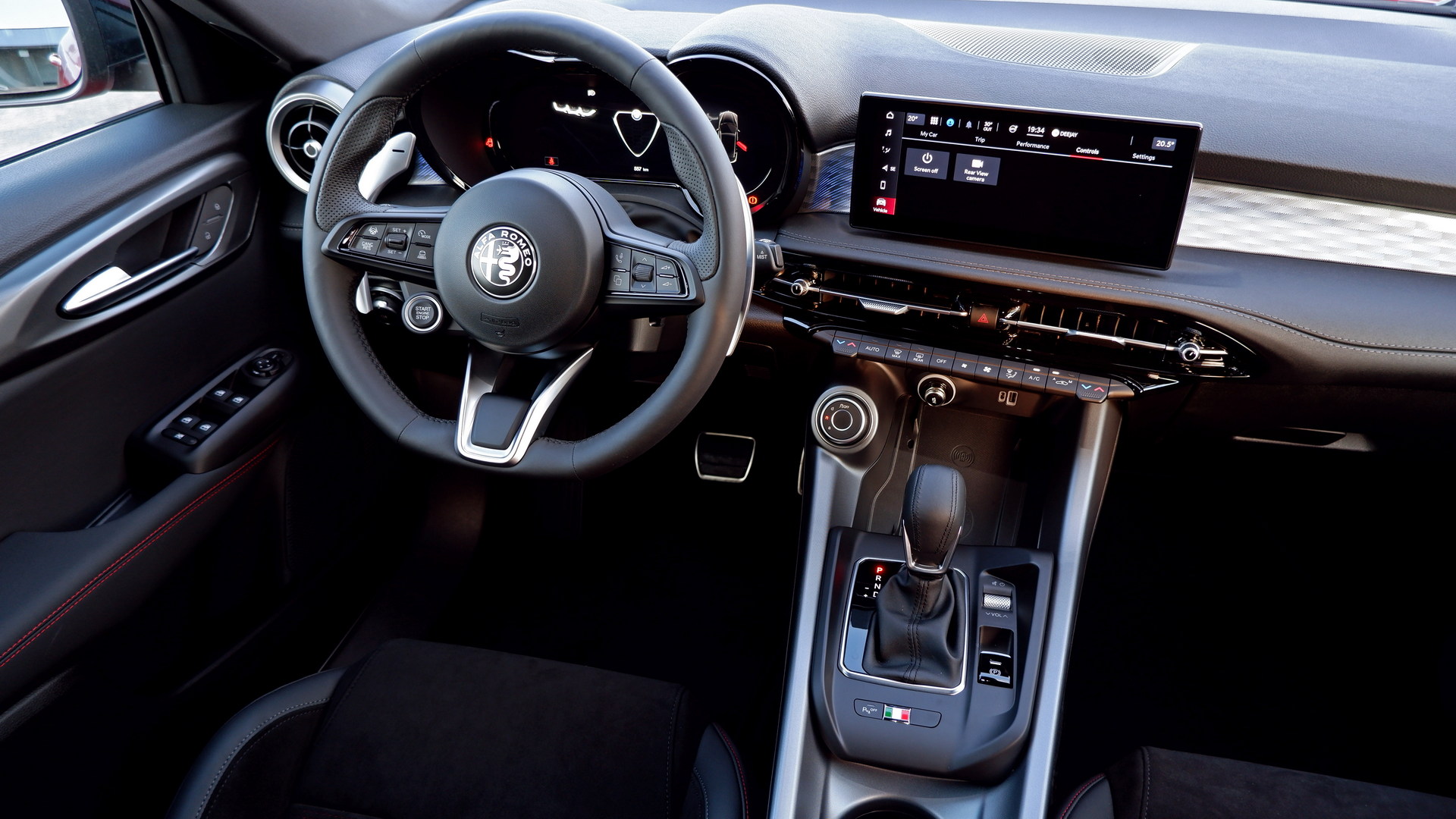 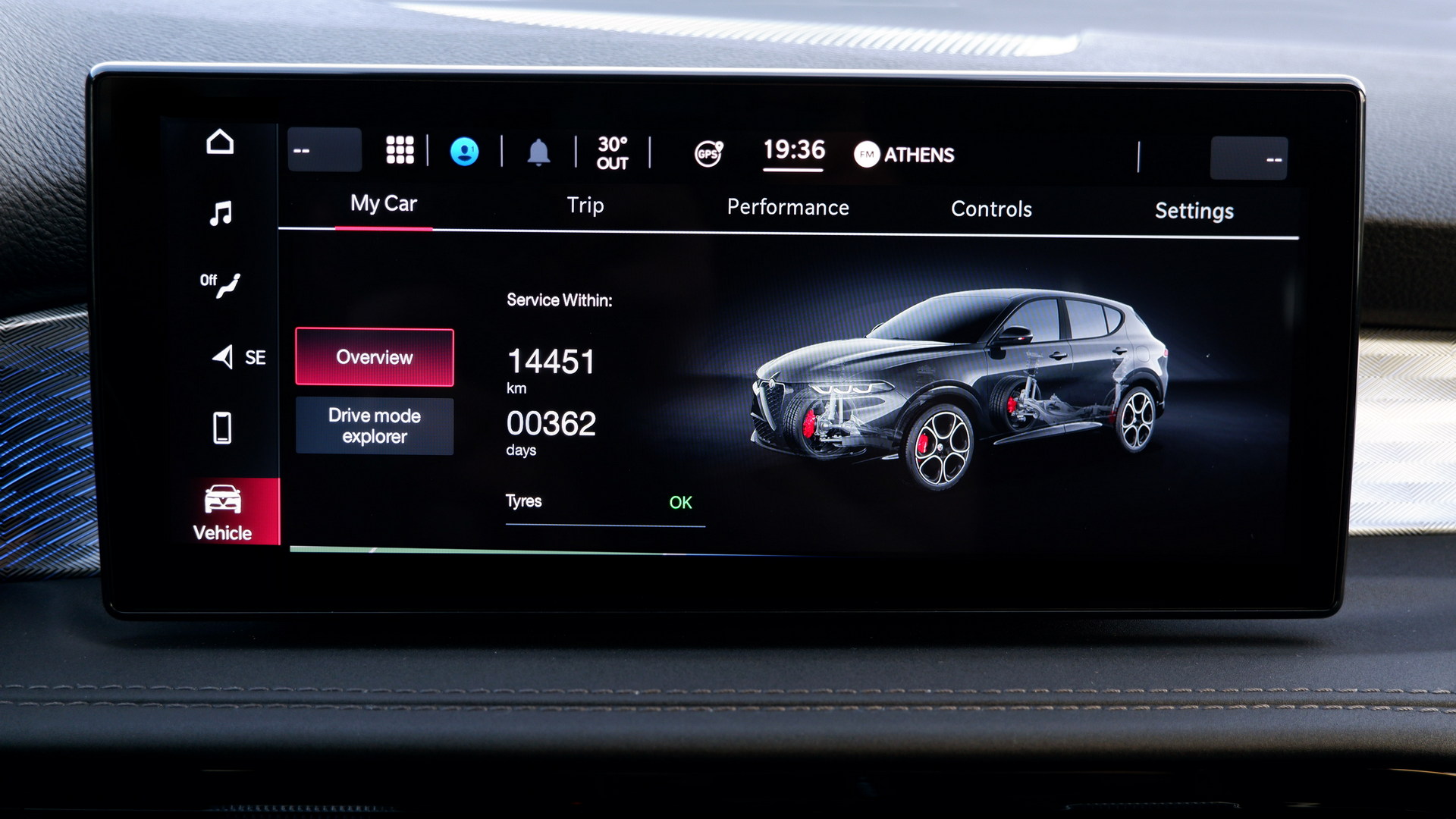 Instead of adding larger screens, Alfa Romeo opted for a simpler and driver-centric approach. The standard 12.3-inch digital instrument cluster is called Cannocchialle, retaining the binocular shape from Alfa Romeo’s of the past with cool-looking graphics. These include the angry face of the car as a welcoming screen, plus a nice retro-flavored option for the digital dials. The free-standing 10.25-inch infotainment touchscreen incorporates the familiar UConnect 5 software and has all the latest connectivity features and modern graphics with a good response, although it will gather a lot of fingerprints.

Thankfully Alfa Romeo added a strip of physical buttons for the climate controls below the slim vents. The three-spoke steering wheel with an integrated Ferrari-style start-stop button and large gearshift paddles comes from the Giulia / Stelvio, as is the DNA driving mode selector. The horizontal strip running through the dashboard with ambient lighting is a new feature in the Tonale, and will probably look better in the dark although not as futuristic as we would hope for.

On the other hand, the gearshift selector has common parts with the Compass, looking less modern than newer rivals which is also the case with some parts of the interior design that look more 2020 than 2022. The leather and Alcantara upholstery of the high-spec Speciale is a nice touch, elevating the sporty atmosphere. On the ADAS front, we get a typical Level 2 autonomy, just like in the rest of the Alfa Romeo range. 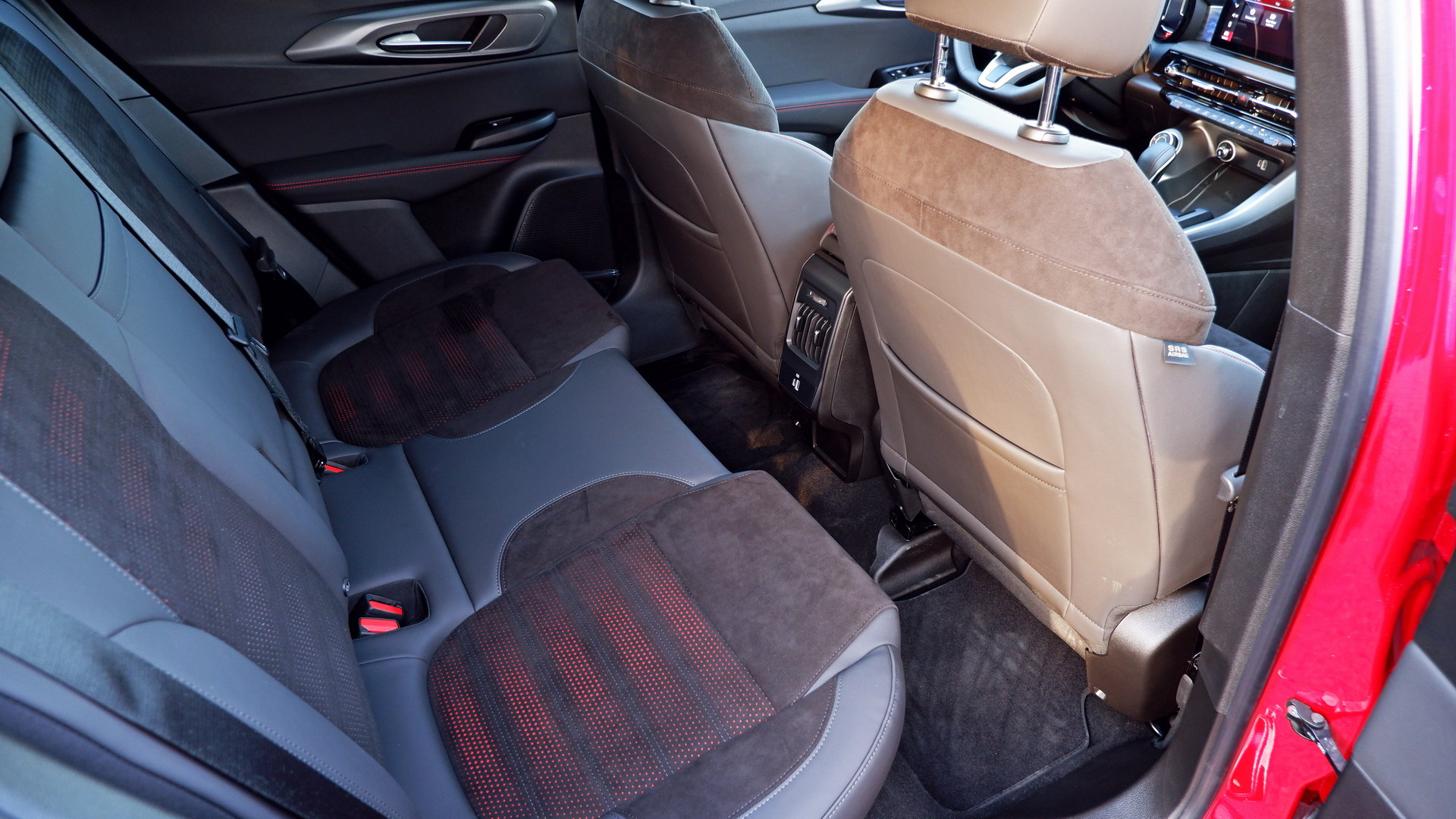 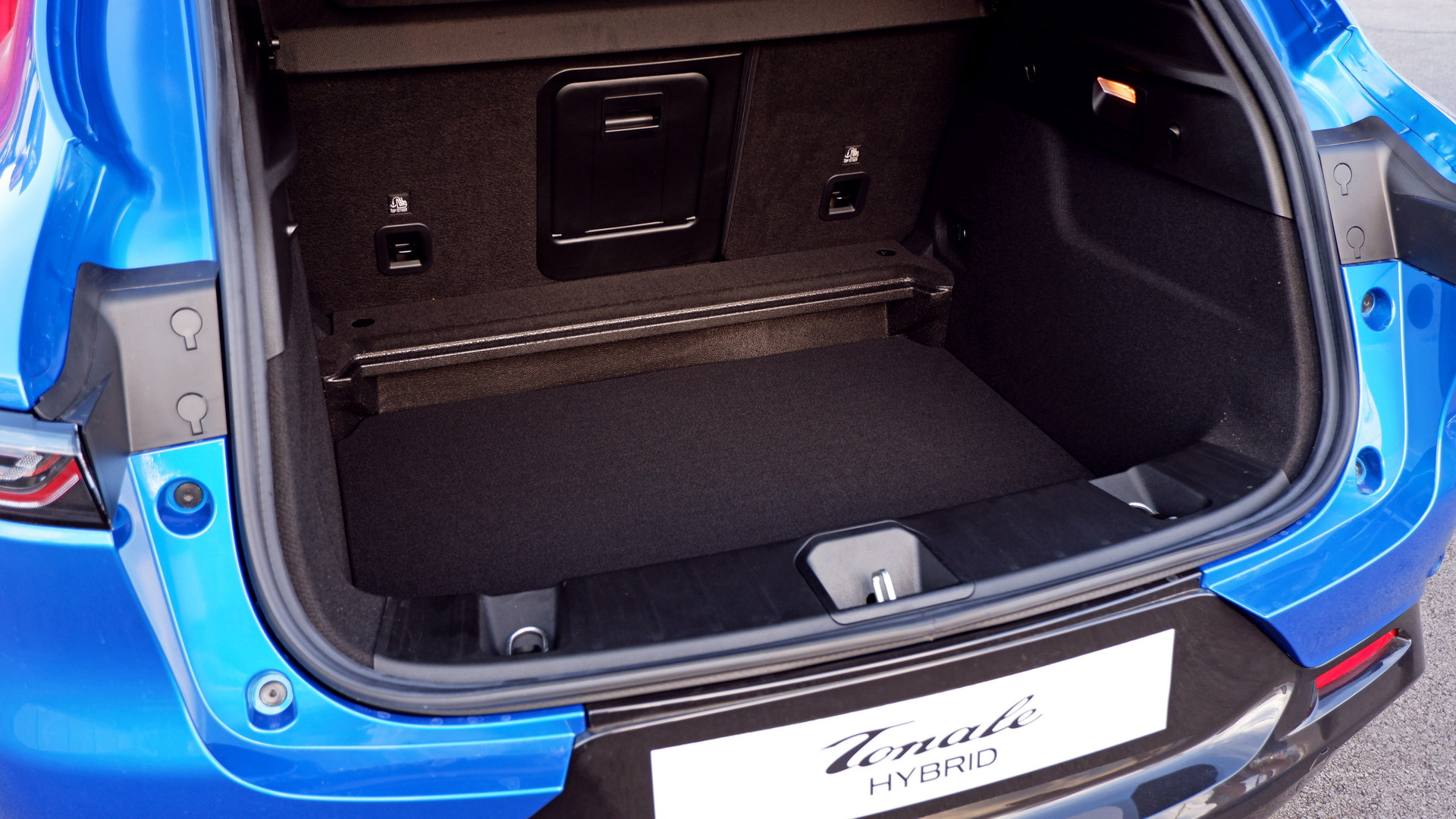 As every C-SUV should, the Tonale delivers plenty of practicality for a vehicle measuring 178.4 in. (4,530 mm) long. The rear passengers have adequate knee room and plenty of headroom, small door pockets, plus their own climate vents and USB ports for charging. There is also a flat seat for a middle passenger, if permitted by the size of the other two.

In the mild-hybrid variants we came across, the boot was rather large, with an advertised figure of 500 lt (17.7 cubic feet), a square shape without the usual bumps for the wheels and an adjustable height for the floor that can go pretty deep since there is not spare tire underneath. The cargo space is 5 lt (0.2 cubic feet) more than in the Mercedes GLA, but 30 lt (1 cubic foot) less than in the Audi Q3 and 40 lt (1.4 cubic feet) less than in the BMW X1. 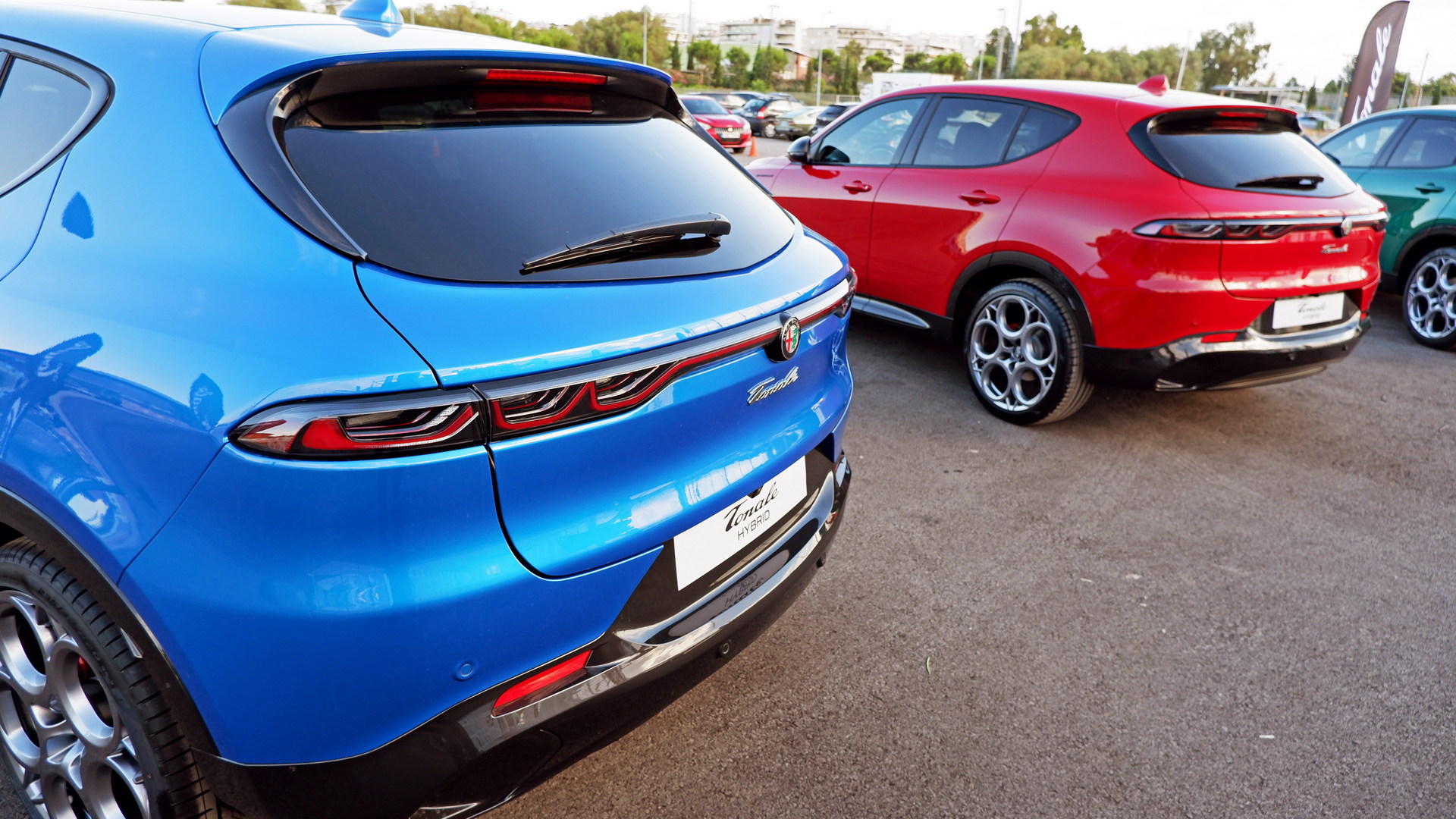 One will argue that it took very long for Alfa Romeo to join the electrification trend, but thanks to the Stellantis parts bin, the automaker went all-in. Instead of going for the STLA Medium architecture which will be widely used in a few years, the Tonale is based on an improved version of the FCA Small Wide platform found in the similarly-sized Jeep Compass – thus the identical 103.8 in. (2,636 mm) wheelbase.

Still, engineers made an effort to differentiate it from its sibling by adding unique touches like the brake-by-wire system from the Giorgio platform with Brembo calipers, wider tracks, quicker steering, and new independent suspension with either the standard Koni FSD dampers or a more sophisticated active suspension. We are eager to see how this new setup works in real life when we get the chance to drive the SUV sometime in the next few months.

In terms of powertrains, setting aside the 1.6-liter turbodiesel with 128 hp (95 kW / 130 PS) that will probably be discontinued in a couple of years, and the US-only turbo 2.0-liter petrol with 256 hp (190 kW / 259 PS), the Tonale gets an electrified range. The turbocharged 1.5-liter petrol engine is available in two different power guises, with 128 hp (96 kW / 130 PS) or 158 hp (118 kW / 160 PS), always combined with a 48V mild hybrid system contributing an extra 20 hp (15 kW / 20 PS). The more powerful version has the Alfa-specific Variable Geometry Turbo, while in both cases power is transmitted to the front axle through a seven-speed dual-clutch automatic gearbox, with all variants of the Tonale being auto-only.

Those who want more power will go for the flagship Q4 plug-in hybrid variant, which is the only one offering all-wheel-drive. The system comprises a turbocharged 1.3-liter petrol engine and a rear-mounted electric motor producing a combined 272 hp (203 kW / 275 PS), which is more than in the Jeep Compass 4Xe sibling. At the same time, the larger 15.5 kWh battery offers a WLTP range of 37 miles (60 km) in EV mode. Alfa Romeo is reportedly working on an even more powerful Quadrifoglio variant of the Tonale which could arrive in a few years’ time if it gets the green light, alongside a fully electric version of the SUV. 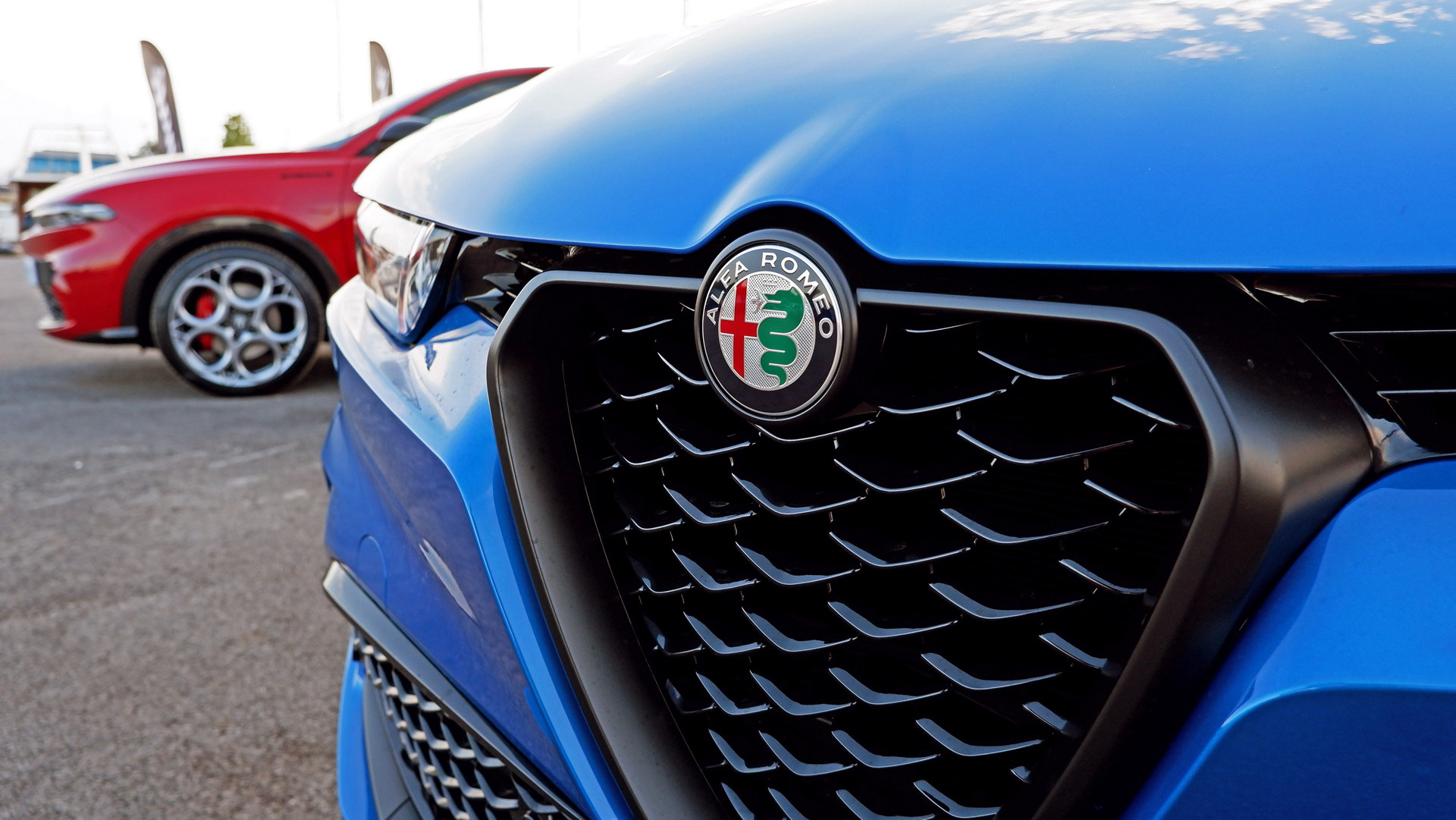 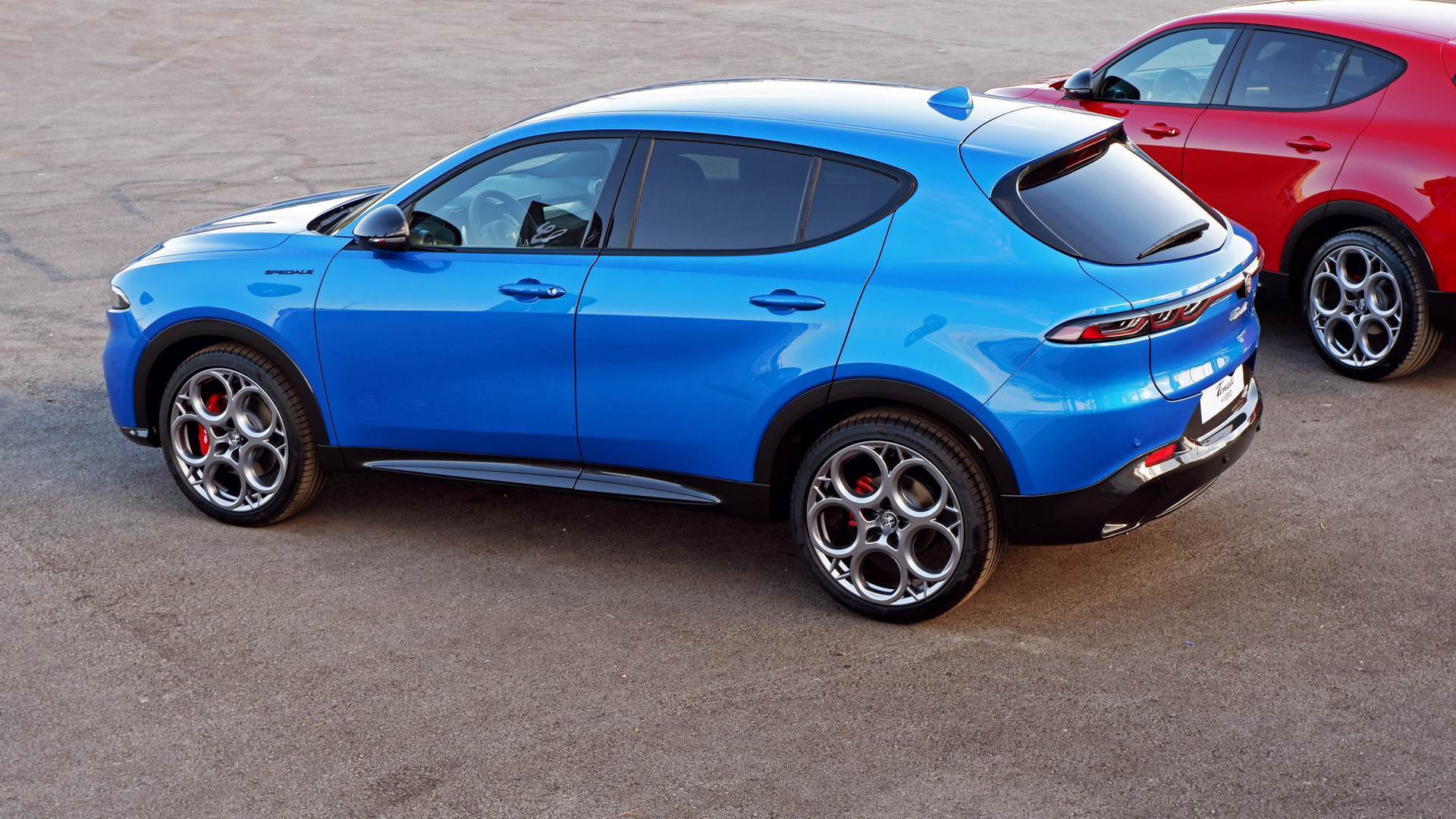 Rivals in the premium compact SUV segment include the BMW X1 which has just received a new generation, the Audi Q3, the Lexus NX, the soon-to-be facelifted Mercedes-Benz GLA, as well as the recently updated Volvo XC40 and DS 7 Crossback. You can also compare it with top-of-the-range versions of non-premium C-SUVs which are too many to take note.

Pricing of the Alfa Romeo Tonale puts it right against the competition, although the Italian company has yet to announce the cost of the PHEV variant that will arrive in the coming months. In Greece, the model starts from €37,300 ($37,488) for the entry-level Super and goes up to €47,000 ($47,228) for the full-spec Speciale. In Italy, the launch edition was priced at €39,000 ($39,253) with generous equipment.

So this was our detailed look at the first all-new Alfa Romeo model since 2016. We are looking forward to driving the Tonale when the first press cars become available, and checking if the promises made by its exterior design are met in terms of performance and driving dynamics.

Tue Aug 2 , 2022
Interest rates are up again, and with the cost of living also on the rise, that shiny new car you had planned to buy on finance may be a problem… View 4 images Before we go any further, we want to make it clear that the following doesn’t constitute financial advice, […]